How to cut returns on stair treads? 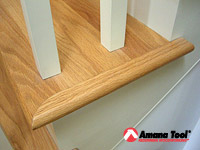 On today's stairs, a stair tread return is a  decorative strip of wood that is applied over the end grain on the open end of the tread. However, on traditional stairs the returns also served to hide the baluster joints from view. Originally the end of each baluster was dovetailed to the stair tread for strength and longevity. A single dovetail on the end of each baluster was carefully fitted to a dovetail socket on the end of the tread. Afterwards the return was applied to hide the joinery. Unfortunately, unless you purchase a custom made stair, today's balusters are simply attached to the tread with a dowel. As you might imagine, unlike a dovetail joint, the round pin or dowel lacks resistance to leverage and torque. As a result, most stair handrails become loose after just a few years.

To cut the space on the end of a tread for a return you'll need to make a mitered stop cut on a tablesaw. I recommend using
Amana Tool saw blade no.610800 to cut the miter. Afterwards, use the same blade to make a stopped crosscut. Because the curvature of the saw blade prevents the cuts from completely intersecting at the corner, you'll need to finish the cuts at the intersection by hand. 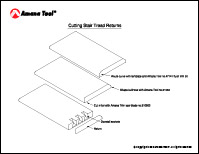 An alternate method is to use a router and template. Instead of a true miter a curved intersection is used instead. First remove most of the waste with a jigsaw and complete the cut with Amana Tool no.47141 flush trim bit and a
template.

To make the bullnose shape on the edges of the treads I use Amana Tool no.51562 bullnose router bit.